In a globalized modern society, and subsequently smaller one, it’s no wonder that the top companies must cater to a more diverse and international audience. A couple decades ago, a company may have been able to produce a website tailored only to its country’s own national identity or language, but in a world where most countries comprise many different cultural groups, a top-tier company must fight to compete for its diverse audience. In order to survive, a company must adapt to a globalized world and cater to its ever growing international audience. Without adaptation, they will not last in a global market.

To assess whether or not countries are successfully adapting, it is helpful to look at the major players in the global market. The Forbes magazine annually releases its Forbes Global 2000 list of the top companies in the world. Unsurprisingly, the top nine companies are based in China and the United States, and most of the top 50 were some of the world’s largest economies. To give you an idea of the types of companies on the list, here are the top 10 companies:

These companies are quintessential of the global market. In order to thrive, their websites and marketing strategies reflect the ever present effects of globalization and the need to market to individuals of other cultures.

One of the most familiar brands on the list, Apple, has more than 700 million iPhones currently in use around the world1. With only 323 million people in the United States, where the company is based, of which nearly 21 million are children under the age of five, it’s likely more than half of Apple’s iPhones are used outside of the United States. That leaves a lot of international customers to convince that iPhones and the Apple brand are accessible and responsive to customers other than Americans. 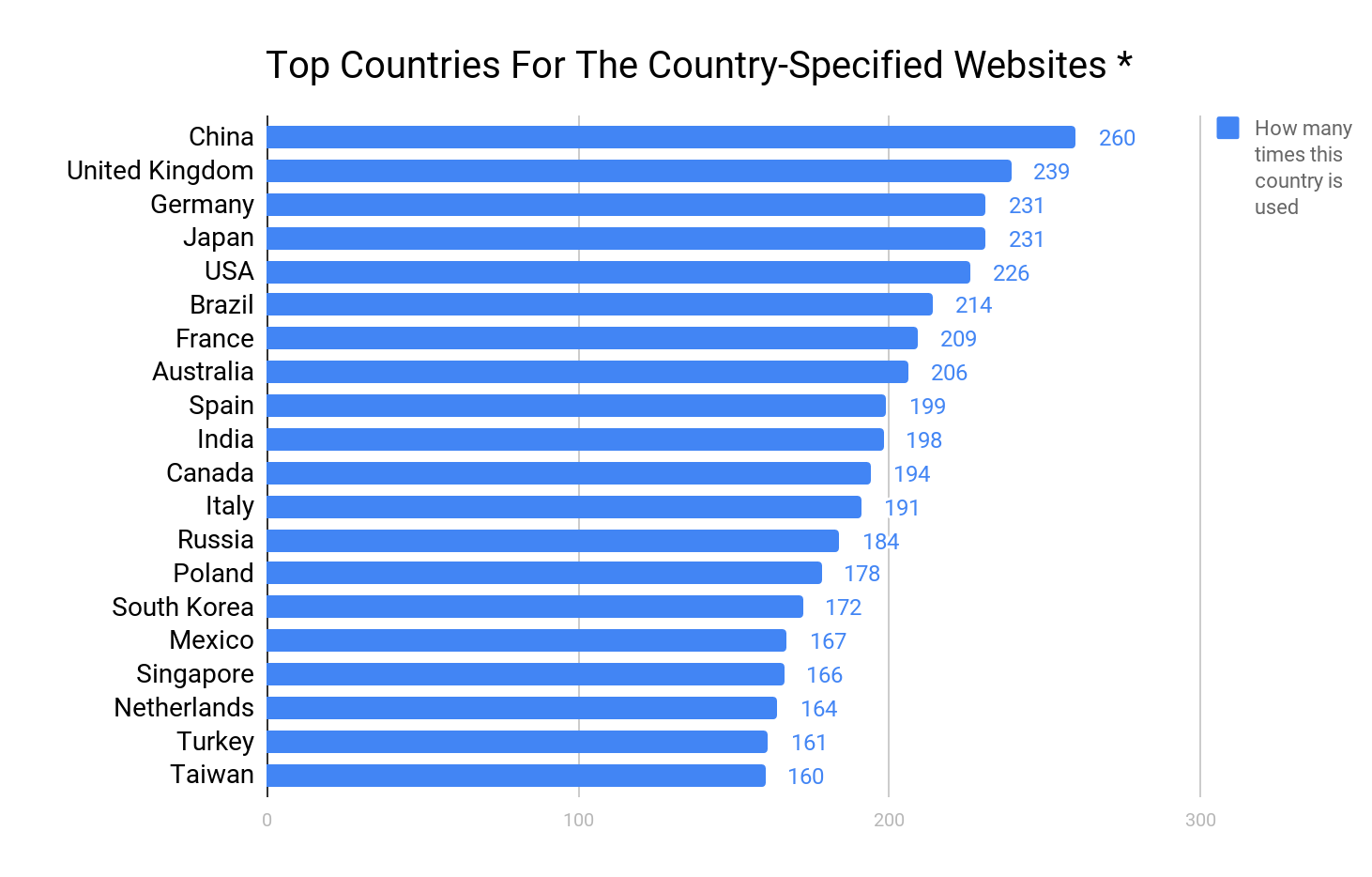 Likewise, a list was compiled of the number of times a particular language was used by a company. Here are the top languages with the percentage of theirs using by companies with multilingual websites:

China may be the most popular country to make a localized website for on the list, but the United States still dominates in the number of companies that made the top 1,000 on the Forbes 2,000 list. Here are the top five countries with the most companies on the list: 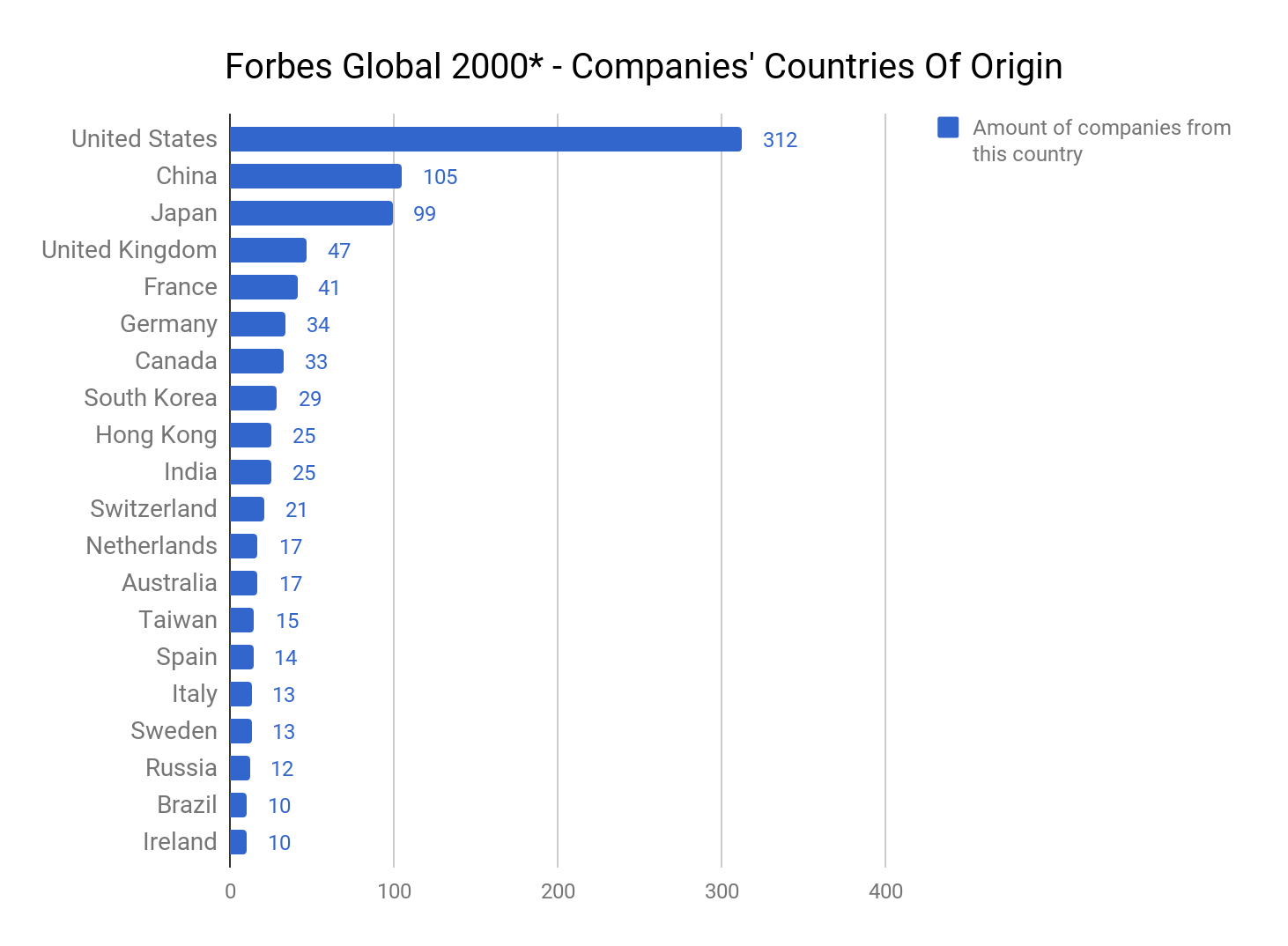 China has certainly announced its dominance in the global markets and has risen to new success over the last couple decades, but English has still remained the most used language. This could be due to the inclusion of English speaking countries United Kingdom and Australia. Or, it could be the fact that the United States has the largest number of companies on the top 1,000 list by more than three times its successor, which is China. However, when choosing which countries to create localized websites for, the United States comes in fifth place. This means fewer companies are choosing to make localized websites for American consumers and it begs the question: Has the United States influence started to wane?

According to a forecast by Forrester: “The total online retail revenues in China, Japan, South Korea, India, and Australia will nearly double from US$733 billion in 2015 to US$1.4 trillion in 2020”2.

Their  analyst writes that: “China’s eCommerce market grows despite the economic slowdown. 2015 marked a global eCommerce turning point: China surpassed the US to become the largest eCommerce market in the world, but its economy also dipped below 7% for the first time since 2009.

While the days of staggering year over year eCommerce growth in China are behind us, current growth rates are solid and more consistent with other mature markets in the region, like Japan and South Korea.”3

On the other hand, the presence of other countries higher on the list could mean that the United States is learning to adapt to other cultures. English may be the most predominant language, but it’s vital that English speaking countries appeal to individuals of other nationalities. There is an obvious growing global influence of other countries such as India, Mexico, and Turkey, all of which fall in the top 20 list for the creation of localized websites. Right now, Mexico and Turkey only have eight countries on the list, while India has 25.

What about the lower income countries?

Unsurprisingly, most of the countries on the top 1,000 are high-income performing countries, according to the World Bank’s income classification. These high-income countries include the United States, Japan, Germany, the United Kingdom, France, Australia, Spain, and many more. China, however, is an upper-middle income country. There are a few surprises on the list that break the traditional high-income mold of successful countries. The Philippines, Vietnam, Indonesia, and India all fall in the top 50 countries most likely to have a localized website for, and all of these countries are lower-middle income countries. These countries have seen immense growth and urbanization in their countries, often at the expense of the poor. Only time will tell if these burgeoning countries will rise to the heights of dominant countries like China or the United States.

According to Internet Live Stats, Philippines, Vietnam, Indonesia, and India for now have relatively middle internet penetration, but all of them show growth potential and digital development.

The majority of industries represented among the top 1,000 companies were regional banks. There were 112 companies that were considered to be regional banks, followed by 54 electric utilities, 48 oil and gas operations, 42 investment services, and 42 real estate companies. Traditional companies that may have once topped the list, such as iron and steel, railroad, metals and mining, and auto and truck part companies all ended up much lower on the list.What types of industries are on the list?

The fact that regional banks and electric utility companies topped the list is worth mentioning since both are typically national level companies and rarely internationally owned. This might reflect growing globalization and the merging of cultures. A regional bank in the United Kingdom can no longer rely on a website that caters to Caucasian British customers. The growing diversity requires them to have a localized website that speaks to and caters to the diverse population it has acquired. In order to attract the large Asian and African populations in the United Kingdom, banks need to make sure these populations feel included and that the banks are accessible to them.

What does this mean for global marketing?

The top 1,000 countries on the Forbes 2,000 list have many of the dominant world name businesses that anyone will recognize, regardless of nationality or citizenship. In a global network of businesses, it is essential that marketing adapts to the new world order. To survive in this new world, businesses cannot be single-minded, but must instead consider the diversity of their customers. This can be achieved through creating localized websites. As a parting word, here are a few tips on how to achieve a stellar marketing plan in the new global landscape:

1. Make sure you have translations on your website. And make sure they’re correct. Sometimes colloquial sayings or casual language might not translate as well as you think. Use a reputable language service provider or an in country native speaker for your localized content.

2. Make sure the photos, symbols, and references are culturally neutral and do not offend any minority cultures in your market of interest.

3. Make sure your writing is clear, jargon free and easy for people who do not speak your language to understand.

4. Make sure important details such as time and date formats, currency, and all other units of measure are tailored to your target audiences.

5. If you have comments or customer feedback, make sure it is appropriate and sensitive to all cultures that are using your service or website.

If you follow these tips, you might just see your own company on the Forbes Global 2,000 list one day. For now, hopefully this just helps you gain a few new customers.

1. Here's How Many iPhones Are Currently Being Used Worldwide fortune.com

2. ASIA PACIFIC ECOMMERCE MARKET TO REACH US$1.4 TRILLION IN 2020 www.forrester.com

3. How Big Will eCommerce In Asia Pacific Be In Five Years? go.forrester.com