The marketing team at IDM Spot [International Digital Marketing Spot] reviewed the first 1000 companies from The Forbes Global 2000 list in order to find out what languages the leading public companies in the world are using on their websites and how the language selection process is designed and implemented.

The Forbes Global 2000 is an annual ranking of the top 2000 public companies in the world by Forbes magazine. The ranking is based on a mix of four metrics: sales, profit, assets, and market value.

Having a multilingual website is a key marketing and sales tool for any business that aims to attract buyers and prospects from abroad.

Key findings In this article:

~   Which are the most popular languages

~   How is language selection designed

~   How many languages are used on average

Language negotiation is a step that is done by the webserver in which the server checks different aspects in order to then automatically redirect the user to one of the available languages on the website. Typically the different aspects to check include:

-  URL in the browser bar (ex de.airbnb.com vs airbnb.com )

-  the language setting of the user's browser

-  default language if none of the above cases are available.

It’s up to the web developer to set the priority for the above mentioned checks. For example, it might be the most important to look at existing cookies of users previous selection and based on this, redirect the user to this language, if there is no cookies, then the server might look at URL setting as the second priority to determine language, if there is no language in the URL, then server might check the browser language, and ultimately if none of these points are available, the server will take the default.

About 10% of the reviewed companies from the Forbes Global list, use language negotiation to automatically direct users to an available language on the website.

Should you be using language negotiation on your website?

Regardless of using language negotiation, make sure that you have an easy to find, easy to use way for users to switch language.

In the next section, let's take a look how language selection is implemented for the Global Forbes websites.

48% of websites from the Forbes Global list are multilingual, meaning that the websites include at least 2 languages (36% from them are also multiregional and include the country selection, you can check out the study).

Out of these 480 multilingual websites, 72% are bilingual, i.e. include only 2 languages for the choice.

On these websites, the most popular language version is English - which is available on all websites.

It is followed by Chinese which is an option for 23% of the websites.

Third and fourth most frequently used languages among bilingual websites are Japanese and Spanish - at 14% each.

In 13% of cases the second language for selection is French and in 10% it is German.

28% of the reviewed companies have multilingual website versions for more than two languages.

And only 1.5% of websites have more than 10 languages. These are websites of the next companies: 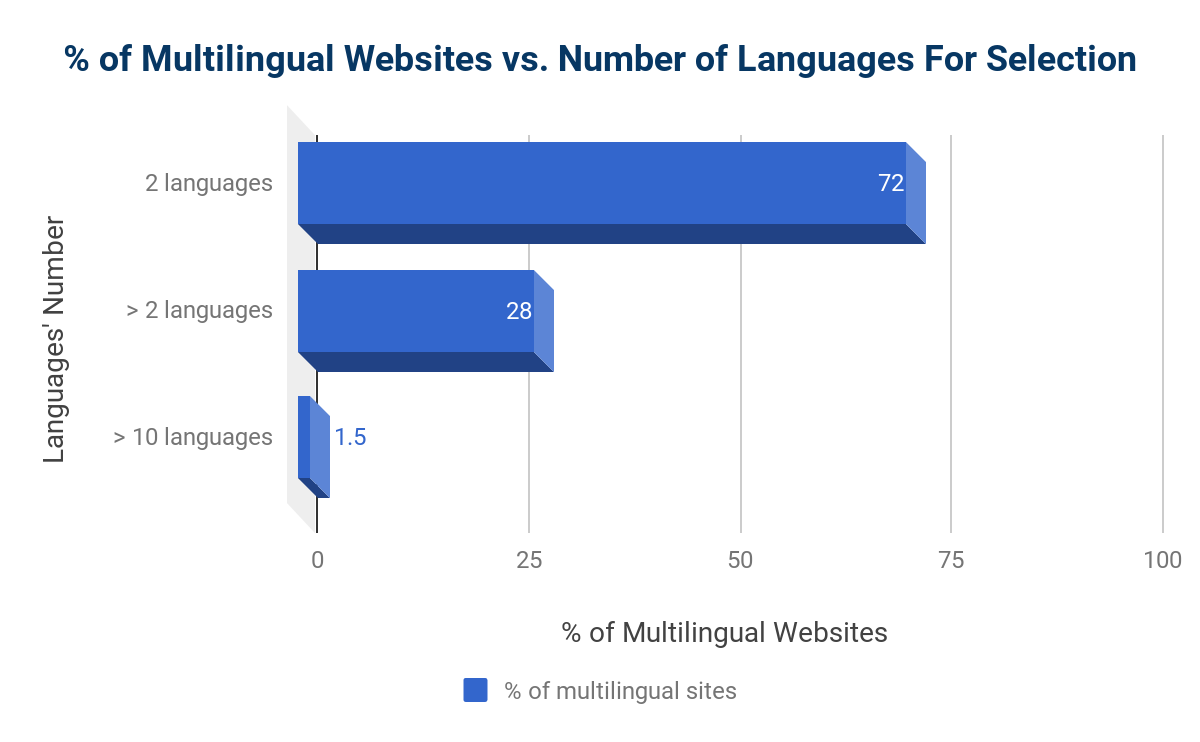 The average number of languages from the 480 multilingual websites is 3.

A great example of a multilingual website with a wide selection of languages is Nokia, which offers their visitors a choice of 26 languages: 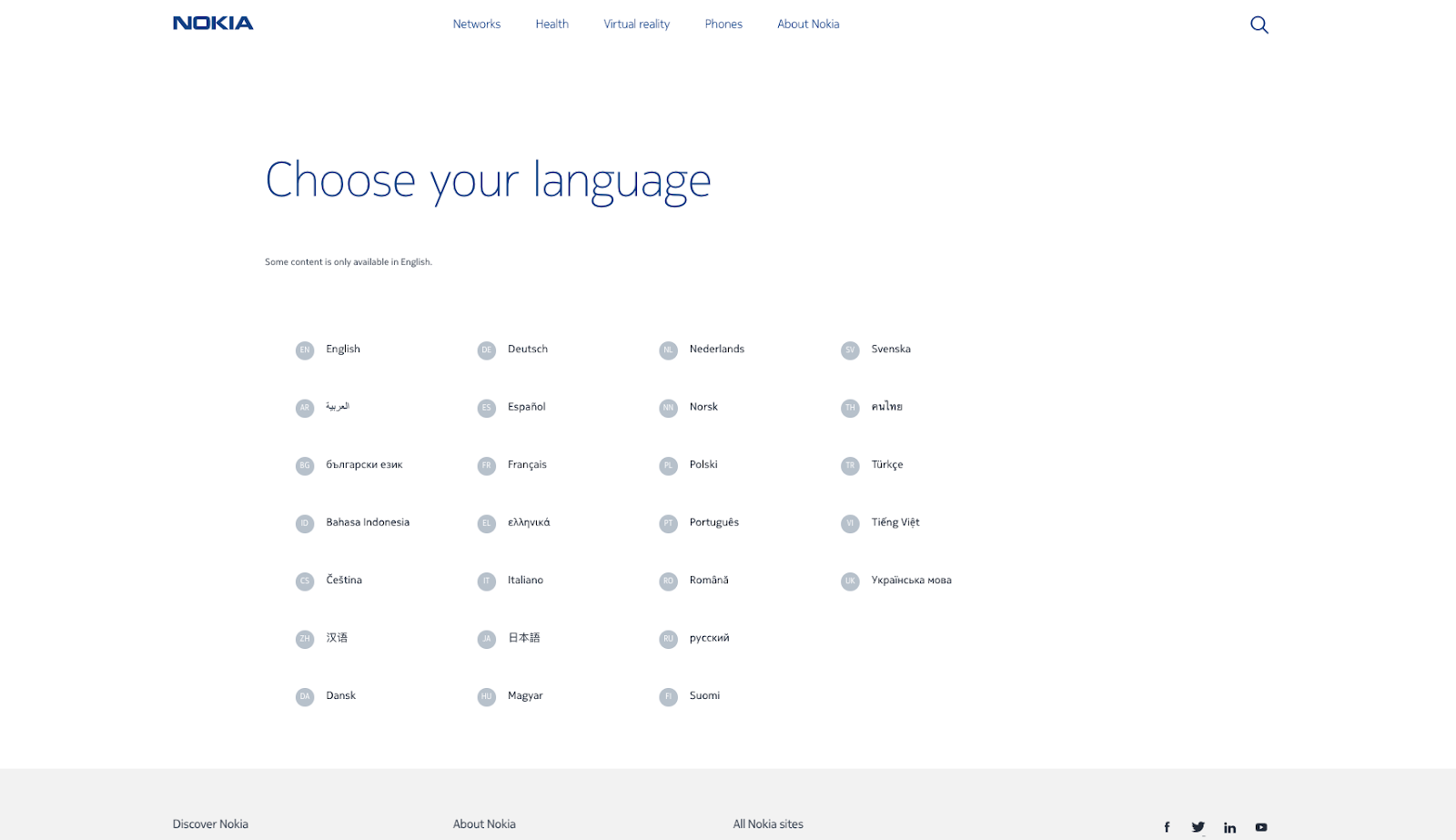 Language selection triggers are design elements on a website that indicate how and where to switch between languages. A trigger icon or text is used to indicate that languages are available

In our research, we found that a Language selection trigger is used by only 27% of companies with multilingual websites.

If no language selection trigger is used, a user can choose the preferred language directly from a list of available languages, without any additional icons, buttons, drop-down menus, or links.

Here are a few examples of Language Switching without the use of a ‘Selection Trigger’ Icon:

The most popular trigger type used by the reviewed websites is a ‘Language Name’, which is used in 24% of the time. The ‘Language name’ trigger either uses the language name in English (e.g. German, Spanish) or translates the language title (eg. Español for Spanish, or Français for French, or Deutsch for German).

The second most popular trigger type is a Language Code (e.g. “DE” for German, or “EN” for English) which is used in 23% of the reviewed cases.

Another popular trigger type is the word "Language" or "Other Language", which is used in 17% of the cases.

The Globe icon is used as a Trigger Type in about 14% of the cases. A good example is the website of the Brookfield Asset Management Company. 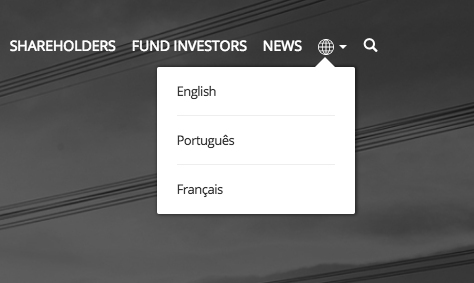 Below you can see some examples of ‘other types’: 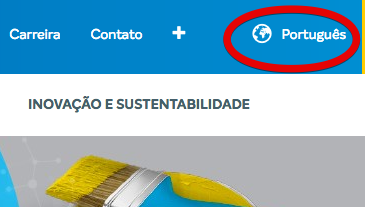 in less than 1% of the cases we found some other combination of text, names, flags, codes, and icons. 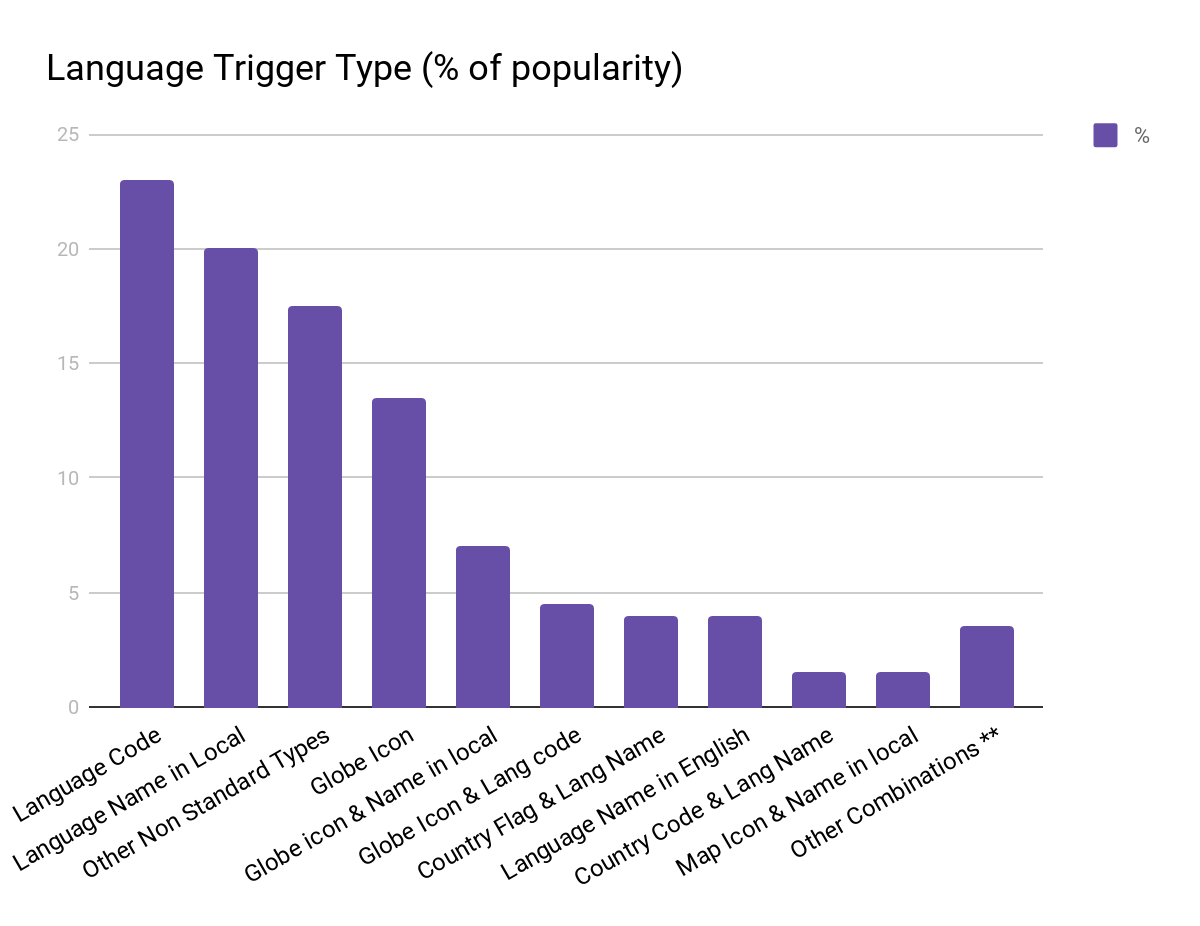 The Language Selection Type is either revealed by the ‘Language Trigger’, which oftentimes is a Globe, an Icon, or some other way of revealing or triggering the available languages. 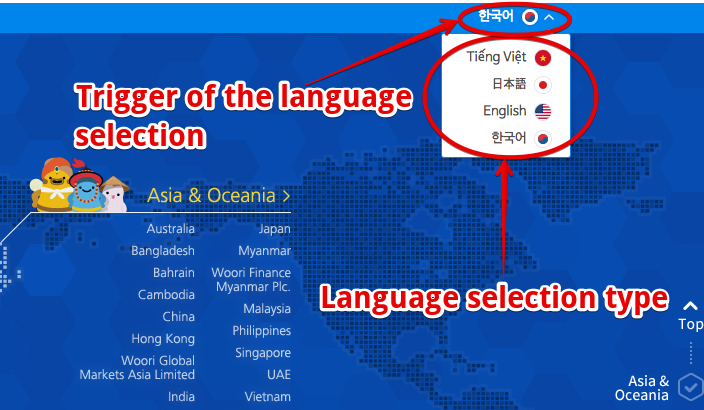 There are many language selection types and their combinations. Languages can be selected via their language codes according to the standardized nomenclature for languages’ classification ISO-639, via their names in their local language or names in English, via different combinations of flags, country name etc.

The most popular language selection type, used in 56% of all the cases, is a language name written in its local language. For example:

In 20% of the cases a user, can choose a language via its Language Code. For example EN for English, ES for Spanish, RU for Russian, ZH for Chinese, JA for Japanese etc. 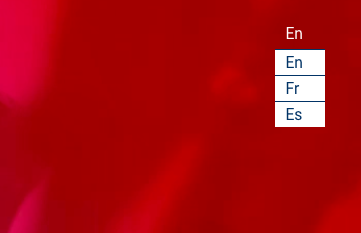 And the third the most popular type is a Language Name written in English - it accounts for 14%. For instance, a language selection on the Dentsu’s website:

Other the most popular 5 language selection types are used in around 2% of the cases (each type).

Country flag with a language name in local language

In several cases (less than 2%) we found that companies use language names written in the current language of the website. 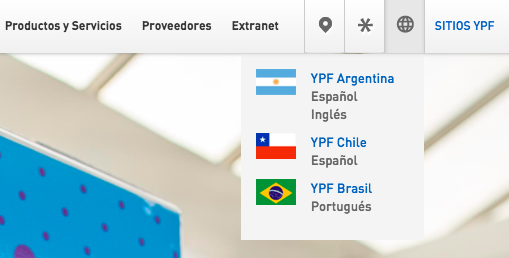 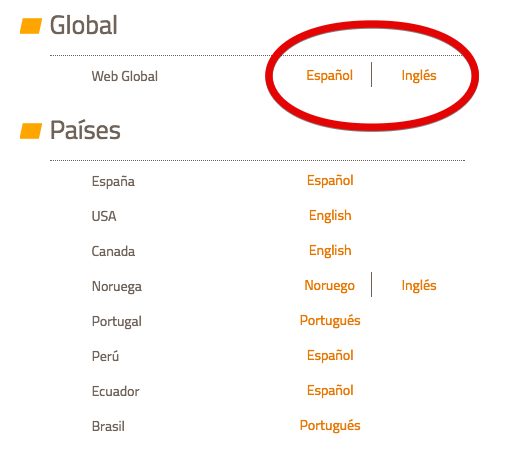 Sometimes companies combine different language selection types on their websites. For example, on Mazda’s website, we can see a language code “EN” used for English and a local name of Japanese language “日本語” used for Japanese.

Marriott International, Inc. offers English and Arabic versions of their international website. They use an American flag for English language and a region name together with a language name in local spelling “ الشرق الأوسط وأفريقيا - اللغة العربية” for the Arabic language. 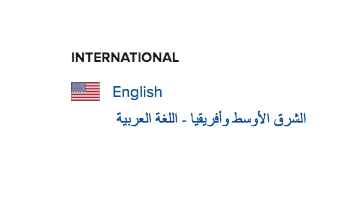 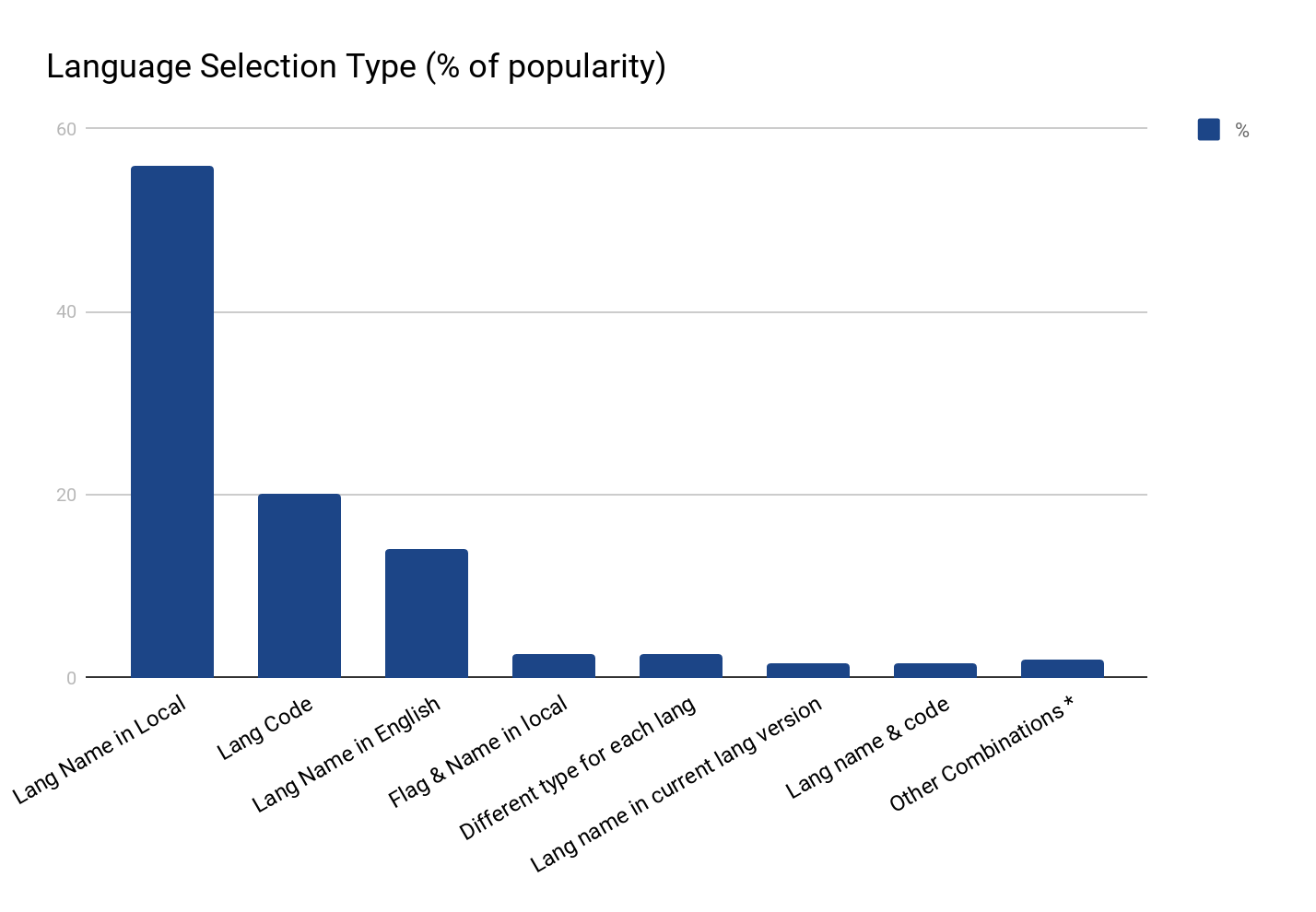 * Other different combinations met in less than 1% of the cases:

- Language Name in Local & in English

Website’s Footer is an unpopular place to put the trigger or the language selector itself and is used in less than 4% of all the cases. 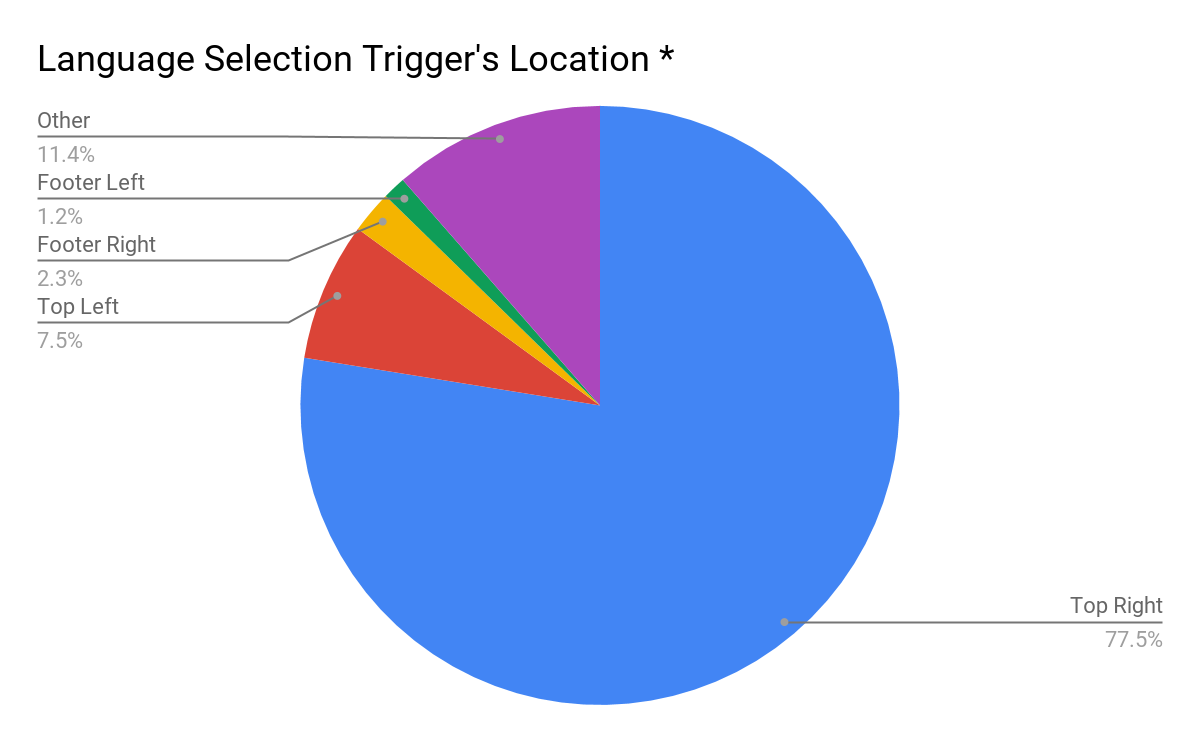 * if a trigger is absent on the website, then it is a location of the language selector itself

The multilingual website will become a necessity for companies as the process of internationalization continues. But for now, as we have found, only around a half of the first 1000 companies from The Forbes Global 2000 list of the top public international companies use a  language selection on their websites.

We have learned how the top companies in the world visualize the option to change languages and how their global audience can choose the language they want to use. There are many things to consider when making a multilingual website. And it is always important to remember that a well-considered language selection option is one of the key things that creates a simple user experience for company's website visitors.