Common Website Localization Mistakes Made by the World’s Biggest Companies

Over 51% of the world’s population is online, spending more than $2 Trillion a year on the global e-commerce market. It is estimated that this will grow to over $4 Trillion by 2020. Most of this growth is coming from emerging markets. Globalization is not a new phenomenon, but the staggering double digit growth in internet usage and e-commerce spending is pushing more and more businesses towards digital globalization.

At IDM Spot, we wanted to find out how the world’s biggest companies are using their websites to cater to a global audience. We manually reviewed 1000 websites from the Forbes Global 2000 list in order to learn what is working and what is failing for enterprise-level companies in their efforts toward digital globalization. This article highlights some of the most common issues that we found during our research.

Below we will talk about the six main pitfalls that appear during localization and review the most common mistakes that world’s biggest companies have made localizing their websites.

Translation and transcreation are among the most important parts of website localization. It’s recommended that your website is translated to your target audience’s local language. Consumers find websites translated in their local language easier to browse and more useful. Consumer attitudes and purchase intentions are also higher on such websites. According to Common Sense Advisory:

The following companies have just partly translated websites. They have various languages on their websites but provide the translation only for some paragraphs/sections/elements of the website and not the full content.

Grupo Bancolombia www.grupobancolombia.com. Their website is in Spanish. They offer English language but only for the section “About Us”.

Saudi Telecom www.stc.com.sa. They offer six language versions of their website in Arabic, English, Indonesian, and some rare languages as Tagalog, Bengali, and Urdu. The versions in these three rare languages have top banner and top sections’ names translated only. The rest of content is in English.

Glencore International www.glencore.com. Apart from English, they offer a Chinese version of their website, but just a little part of it is actually in Chinese. 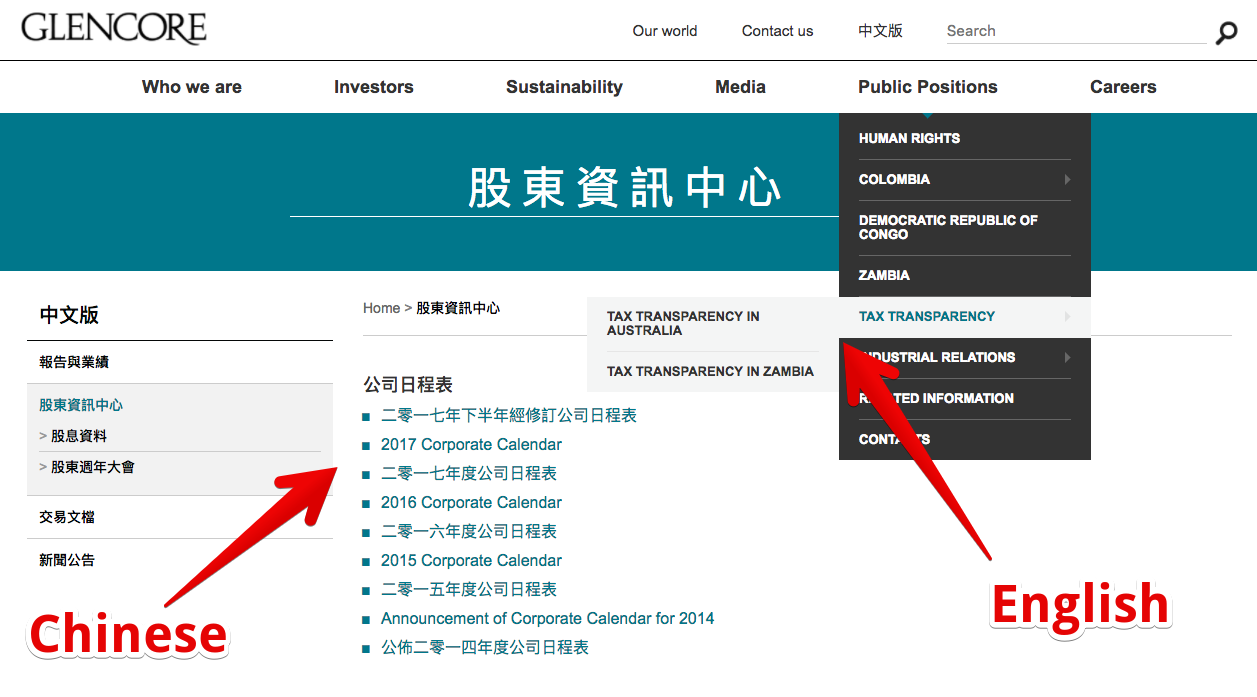 It’s recommended that your website is translated to your target audience’s local language.

Ericsson www.ericsson.com. There is a country selection on their website where are apart from the country you can choose a language for this country (local and English). But the local versions aren’t translated or translated just partly. 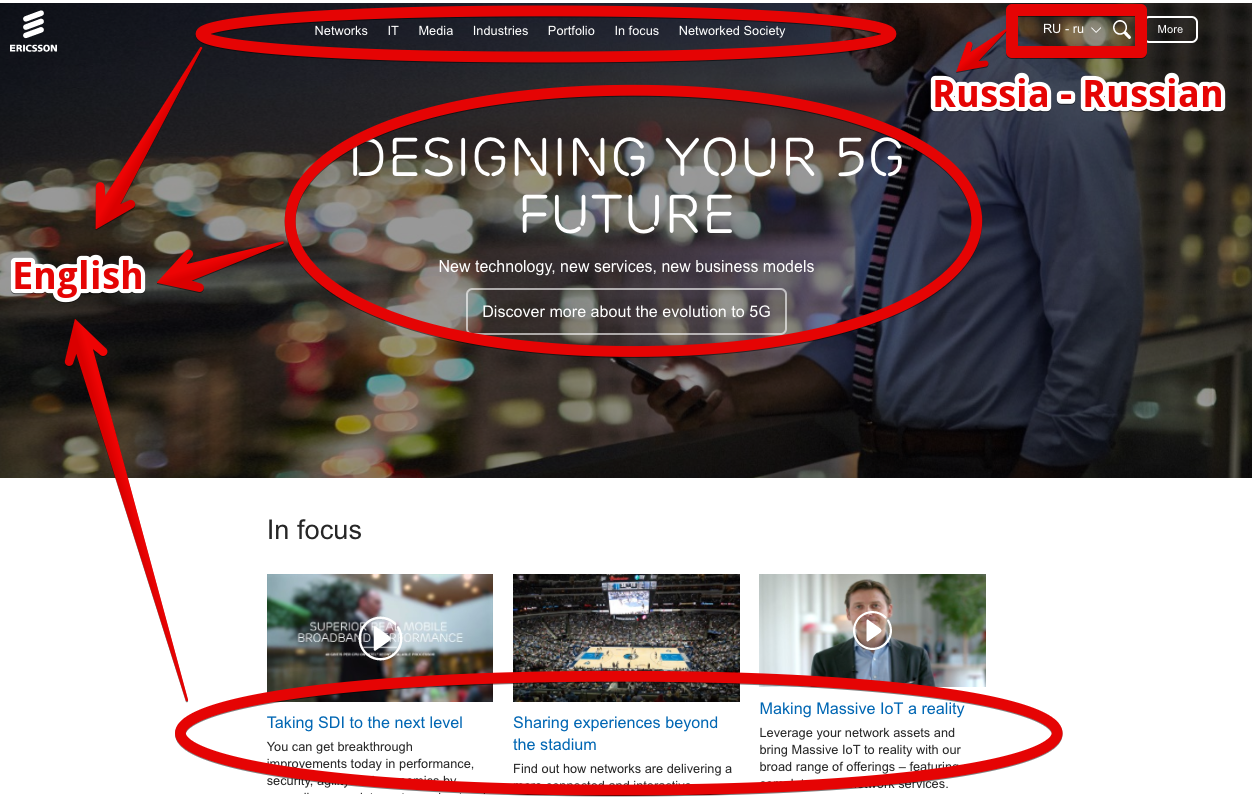 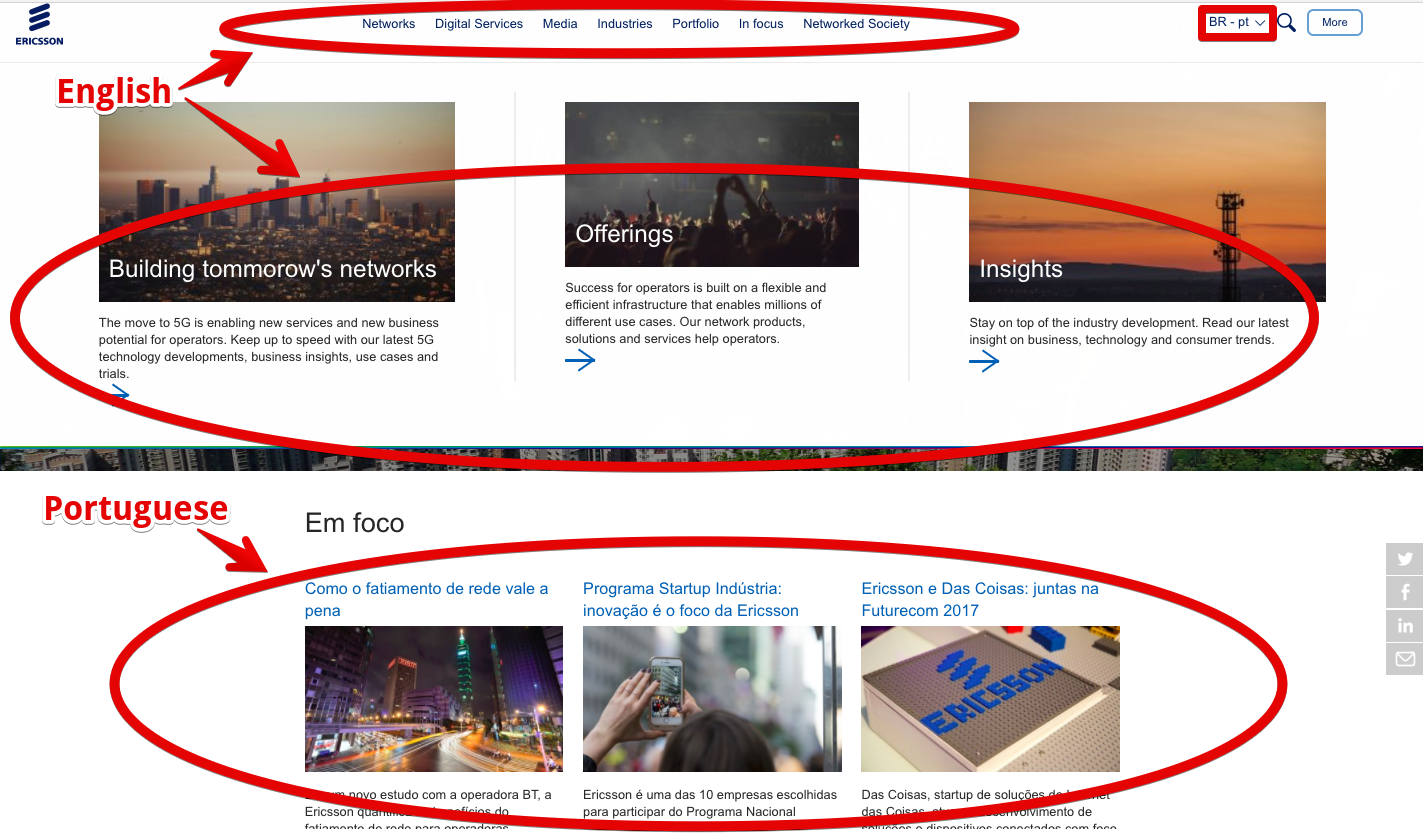 Next we propose to review such simple mistakes as incorrect language selections.

Towngas www.towngas.com. The company uses just one letter “E” in the language selector for English.

An appropriate language indicator is ‘en’ according to a standardized nomenclature used to classify languages ISO 639-1. 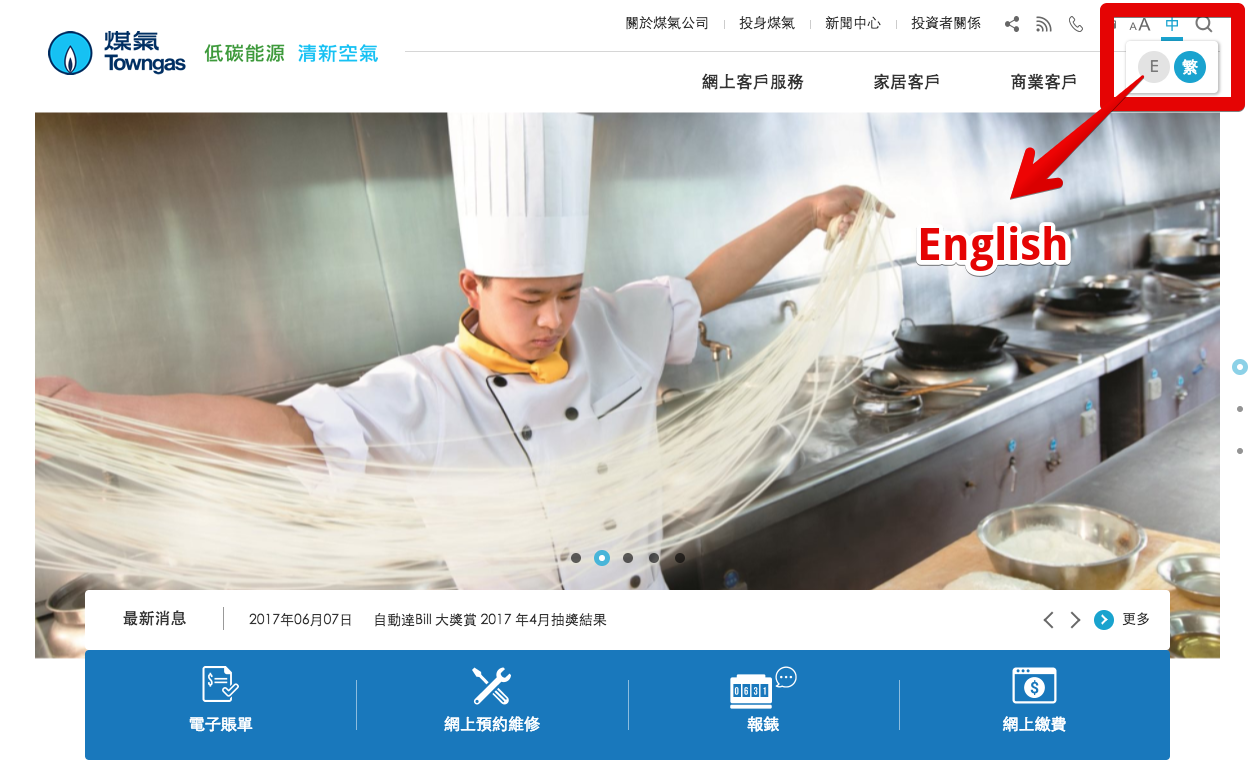 ‘INA’ isn’t official language or country code from ISO but is the country code used by International Olympic Committee (IOC). They use three-letter abbreviation country codes to refer to each group of athletes that participate in the Olympic Games.

Here we would recommend to use the most appropriate identificator of Indonesian language, according to a standardized nomenclature used to classify languages ISO 639-1 - ‘id’.

When a company offers different country versions of its website the country selection should be clear and convenient. A user should be able to easily find a country selector and his/her country in it.

The following companies have various mistakes that notably complicate this process.

MediaTek www.mediatek.com. Its country selection looks like language selection. But in fact, a user gets to the local country website version after choosing an appropriate language. 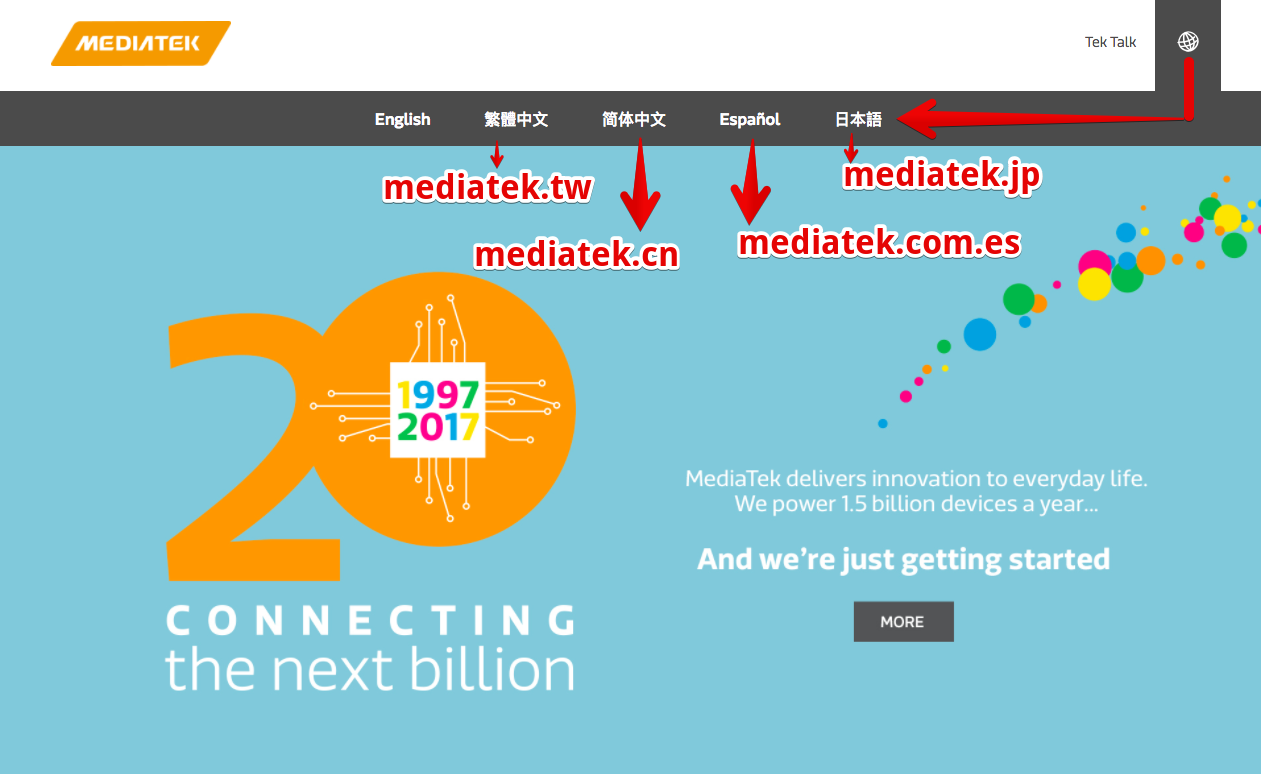 This is confusing for users. If the website uses the country code in Second Level Domain, it is the signal for Google that it is targeting Spain. So it’s not correct to show ‘Español’ as a language selection. What does that mean for the people from Latin America and other Spanish speaking places in the world?

The proper way would be to use ‘Spain’ as a country selection trigger instead of ‘Español’ if the company wants to target a country.

Northern Trust www.northerntrust.com. There is a country selector on the website but nothing changes after selection.

On these two websites, Adobe Flash Player is required to display further information about companies’ locations. 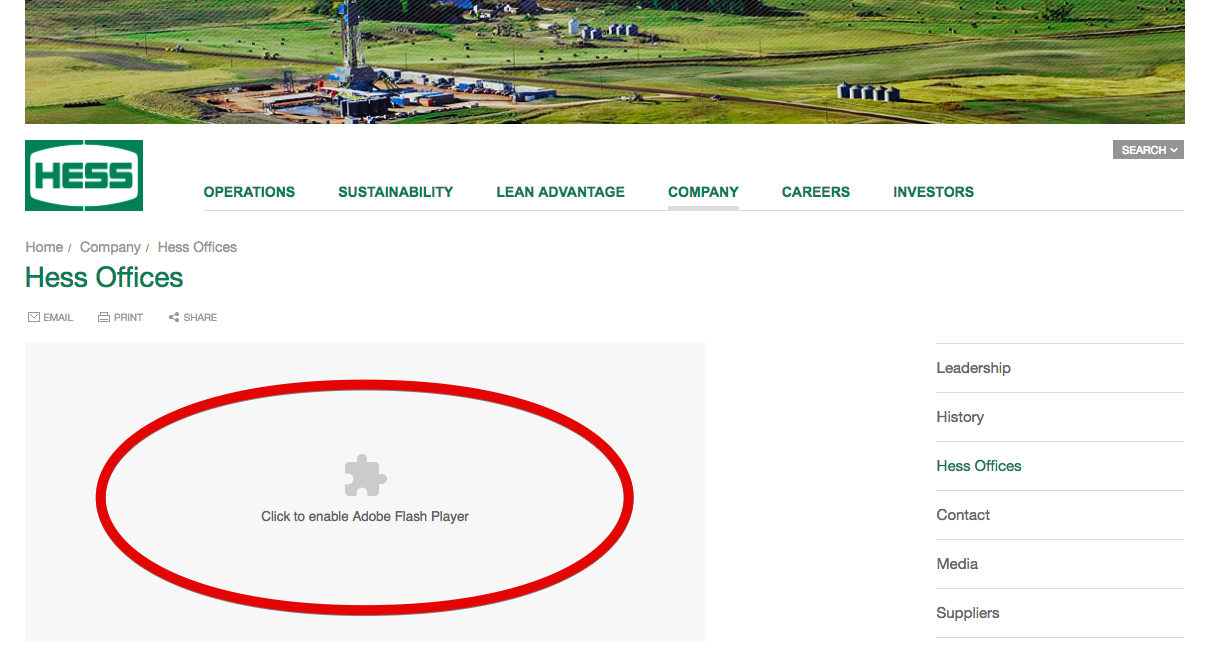 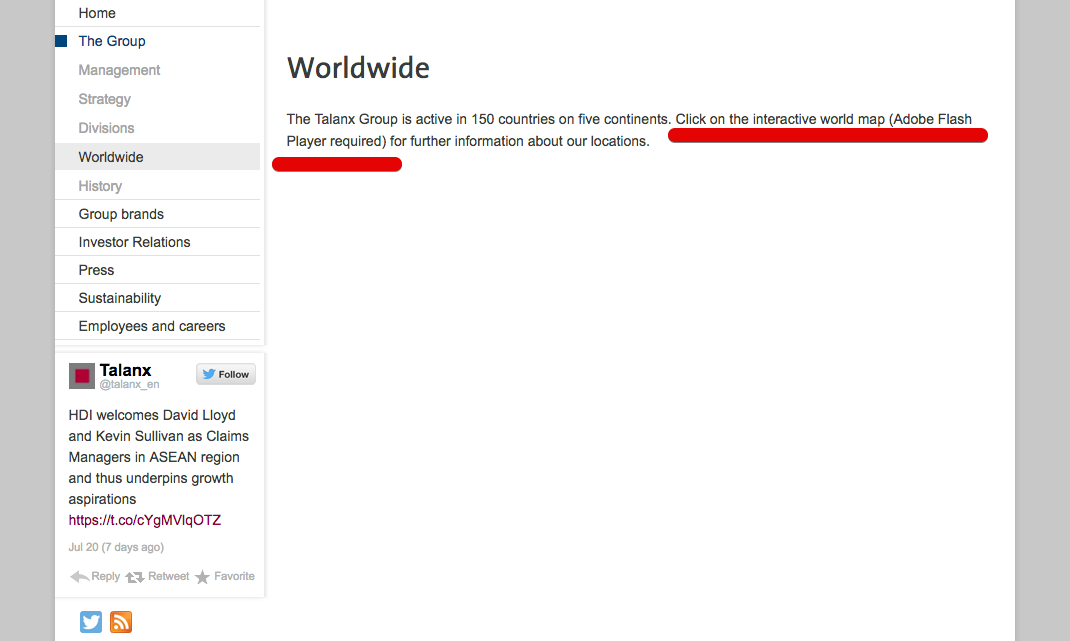 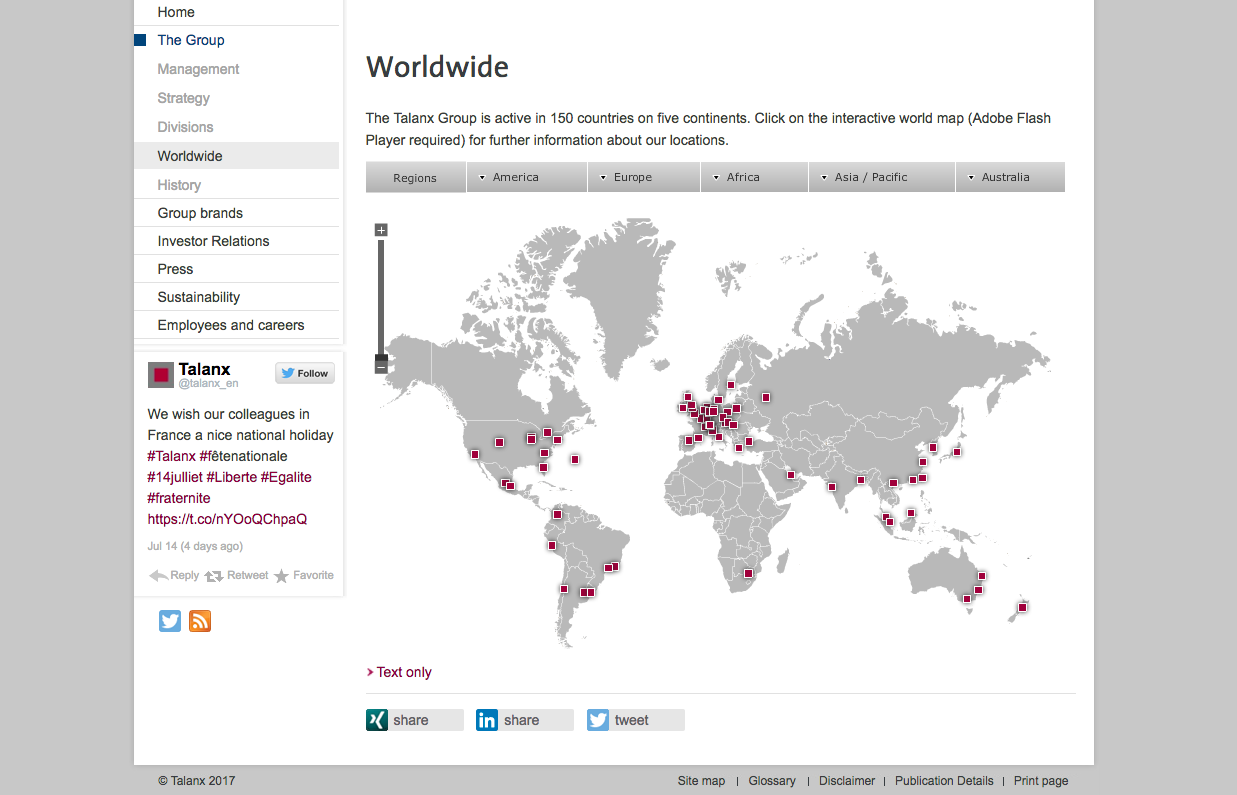 The following companies offer to choose among many countries, but the links to some countries redirect to the global/international or other country’s website versions.

Nestle www.nestle.com. The link to Iran redirects to the global version.

Novartis www.novartis.com. The link to Bangladesh redirects to the global version.

In such cases companies are misleading their visitors with providing links that do not actually point to the certain country version.

KDDI global.kddi.com. Links to the Netherlands and Belgium redirect to the Germany’s website version.

The main country selector with 2 links to Australia: When a company offers different country versions of its website the country selection should be clear and convenient.

The following 2 companies have country selectors hidden and its presence on the websites isn’t obvious.

Cemex www.cemex.com. They have complicated country selector, which is difficult to find it and use.  About us --> History --> Global Location Information

DP World web.dpworld.com. A country selector can be found in the section “Contact US”. 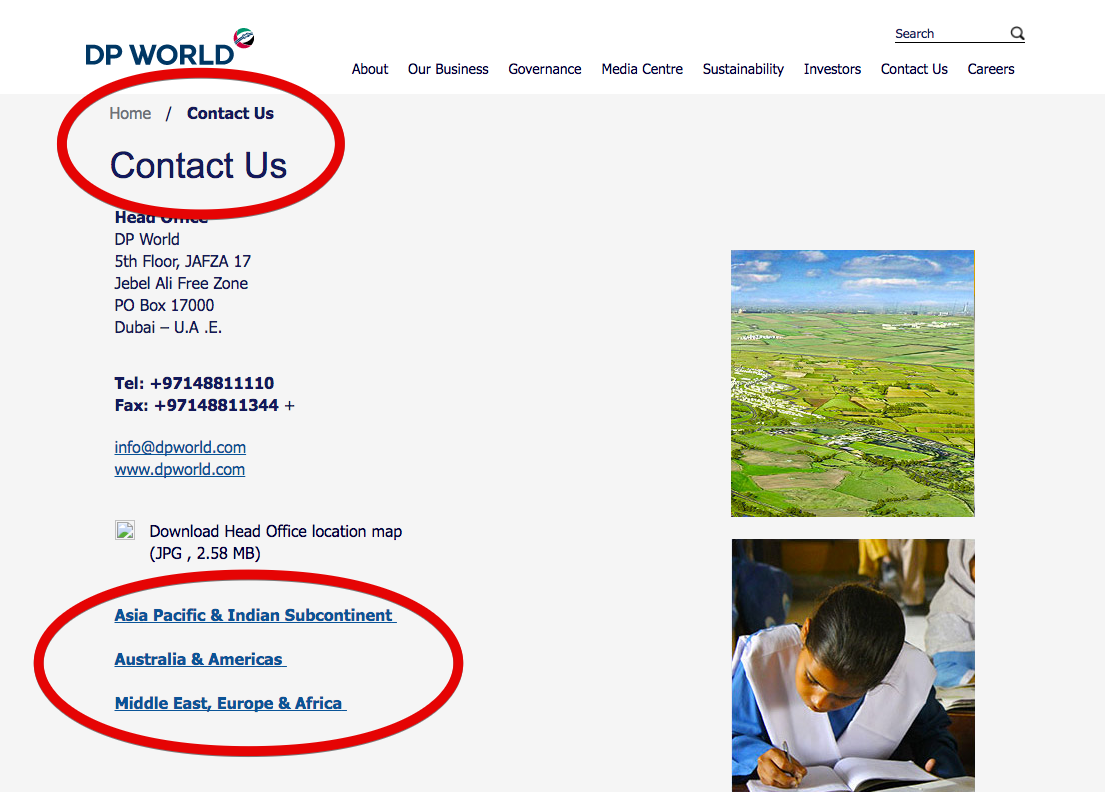 Best Buy www.bestbuy.com. The countries can be selected only on the global gateway page. In case a user clicks on the wrong country he/she won’t be able to return and change it.

For more information on country selection click here to read our detailed report.

The website’s URL has to be clear, with the use of official country/language names and codes according to the International Organization for Standardization (ISO). The URL format can impact the server architecture and technical characteristics, SEO quality, geotargeting recognizing by users, and more.

According to Google guidelines, companies need to consider using a URL structure that makes it easy to geotarget parts of company's site to different regions. If a company really wants to target a particular region, it is important to note that the use of a ccTLD is generally the strongest signal for users and search engines. 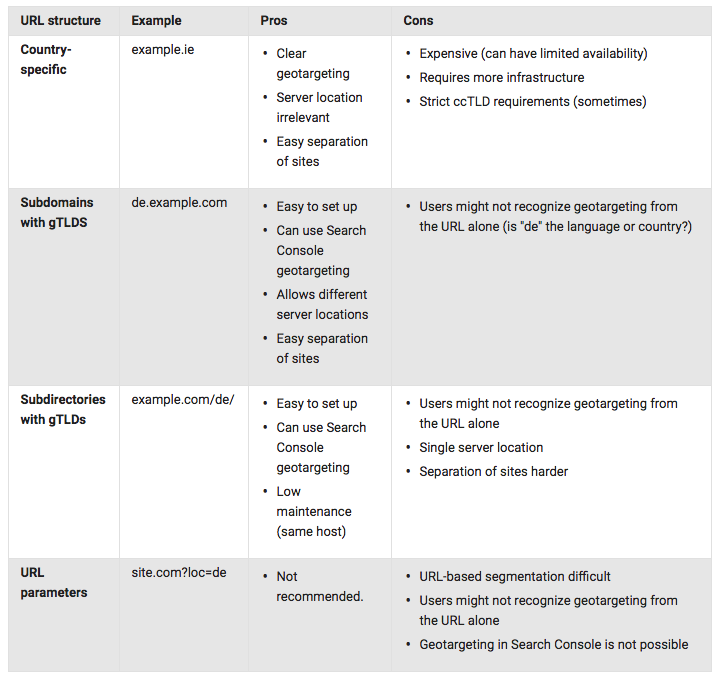 For more information on supported values, visit the Google Search Console Help article on the topic.

The following companies use unofficial or non-standard country/language codes.

Samsung www.samsung.com. There is a wrong country code for South Korean website version.

General Electric www.ge.com. The company uses ‘CB’ code for Cambodia and ‘AG’ code for Algeria, which are non-standard country codes from ISO 3166, but the codes from the FIPS 10-4.

Interesting, that ‘CH’ code belongs to Switzerland and ‘SZ’ code to Swaziland.

H&M www.hm.com. The company uses different numbers in the URLs together with the region’s name for several Asian countries:

For Hong Kong and Macau

American International Group www.aig.com. The company uses some unofficial numbers in the URL next to WWW abbreviation for several countries:

Marubeni www.marubeni.com. The URL for CIS region has a language name instead of a region code or name

Daito Trust Construction www.kentaku.co.jp. Instead of the language code in the URL, they use just the 1st letter of the language for its identification - “e” for the English version.

Qingdao Haier www.haier.com. For the English version, the company uses the right language code, but for the Chinese version, they use the country code.

Shanghai Electric Group www.shanghai-electric.com. There is no identification in the URL for both Chinese and English language versions. Nothing changes in the URL after the language switching.

PetroChina www.petrochina.com.cn. The company doesn’t show any language identification in the URL:

Parker-Hannifin www.parker.com. The company doesn’t use any country code in the URL parameter, only language code.

Here we analyzed all URLs from the first 1000 companies of the Forbes Global 2000 list for the hreflang attribute with the help of this tool: Hreflang.org.

Were found that only around 12% out of all 1000 companies that have hreflang on their website, have correct results.

A valid hreflang can be specified as:

The correct way to write a language code is with dashes, not underscores. The correct value is en-US.

Standardized format for language code is ISO 639-1 nomenclature and for countries, dependent territories and special areas of geographical interest is used the classification 3166-1 Alpha 2.

For generating the valid hreflang, we recommend this tool of Aleyda Solis, International Search Marketer. 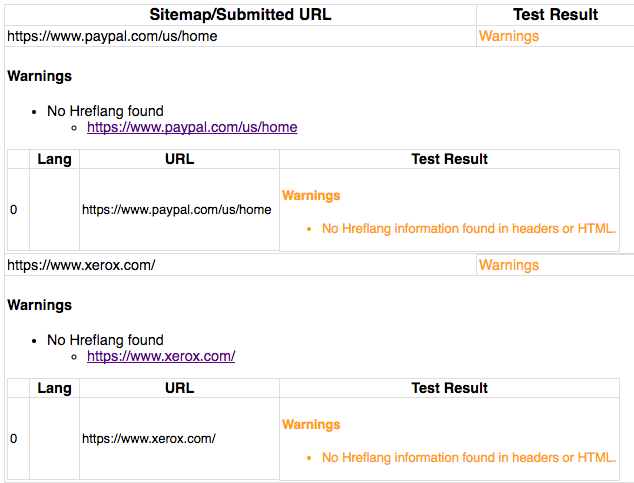 Only around 12% out of all 1000 companies that have hreflang on their website, have correct results.

In 8% of them some errors were also found, such as with canonical URL’s, broken pages, page not linking to itself etc.

For example, the website of Saudi Electricity www.se.com.sa, has an error “Not linking to the canonical version”: 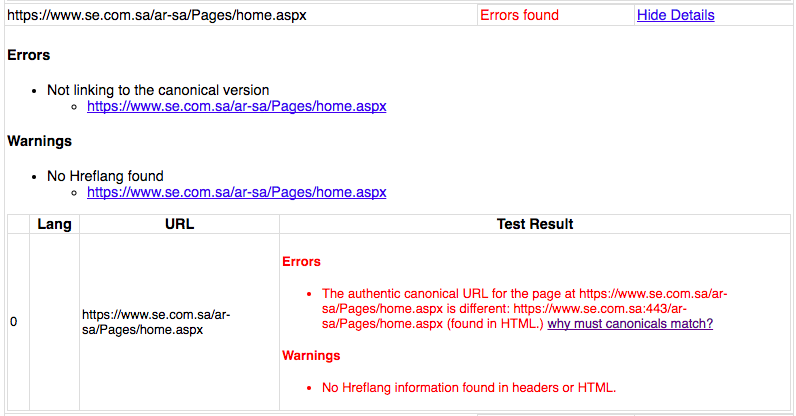 Some forget about such an important thing as a user’s location. In such cases, a user can’t access a website without a VPN because his/her location differs from the company’s country.

If you are international oriented company, make sure your website works and can be accessed without a VPN.

Costco Wholesale www.costco.com. The company offers 6 country-specific versions of its website, but all of them can be accessed without a VPN only by a limited number of countries.

The following companies don’t have other countries versions but still can be accessed without a VPN by a limited number of countries. 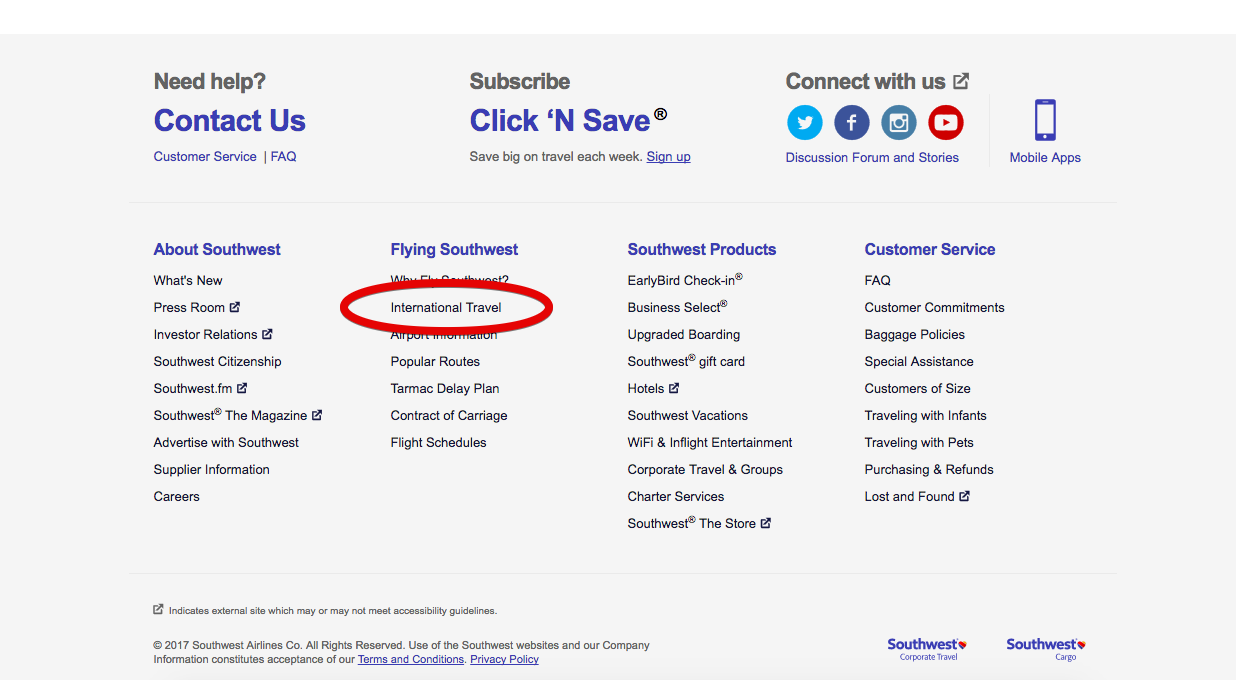 IntercontinentalExchange www.theice.com Even the name has word intercontinental, but the website can’t be accessed from all the countries without a VPN.

If you are international oriented company, make sure your website works and can be accessed without a VPN

Nordstrom www.nordstrom.com All customer can choose which country they want to ship their order to as well as currencies but can’t actually use the website to do it. 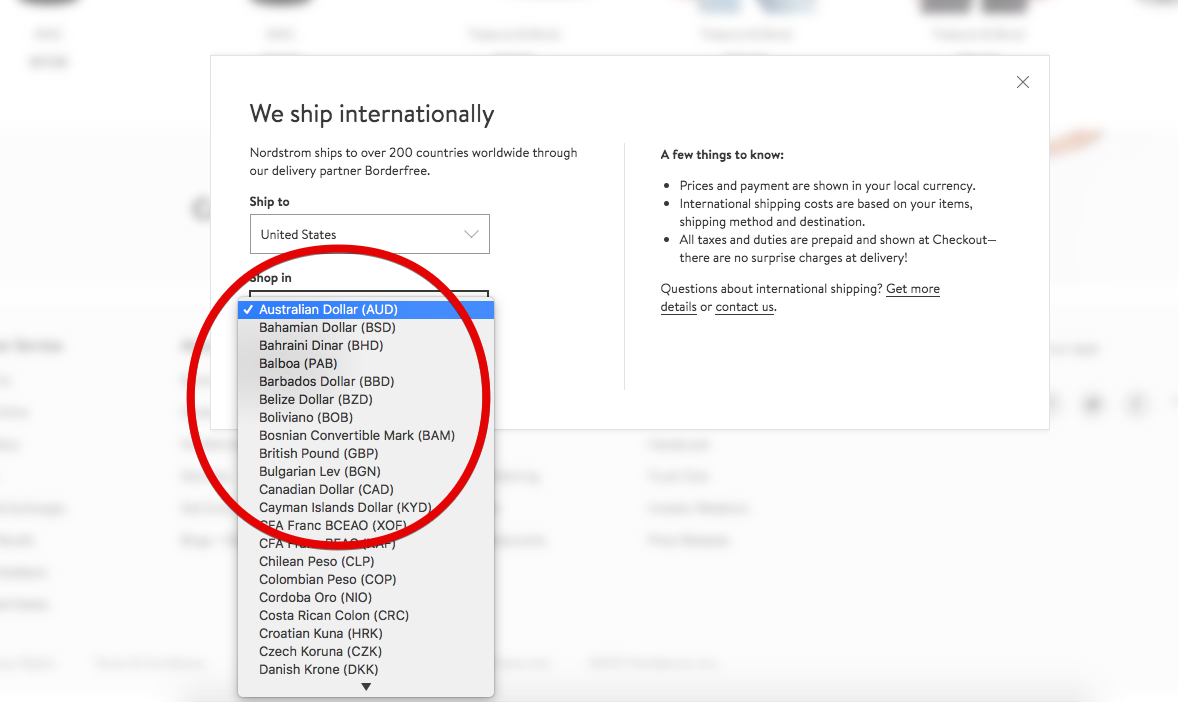 And there are more such companies.

Companies can have reasons for blocking specific countries:

It is interesting that all the companies among first 1000 from Forbes Global 2000 can’t be accessed without a VPN belong to the USA.

These are the most common localization mistakes that are easy to avoid. When diving into the process of localizing your website, ask for a professional help. Globalization experts will help you to avoid these and many other mistakes and will make this process much easier for you.